I’ve held on to this circular chart that I found in an abandoned sewage treatment facility. It was used to monitor the chlorine in the water. Putting that use aside, I was attracted to the form, the marking of time, the charting or monitoring of the water. I knew I would want to use it at some point, so here, eight years later, it is finding its way into these collages. I’m experimenting with image transfer techniques, materials and color. I like the idea of monitoring and charting, which could be a theme using various types of charts. 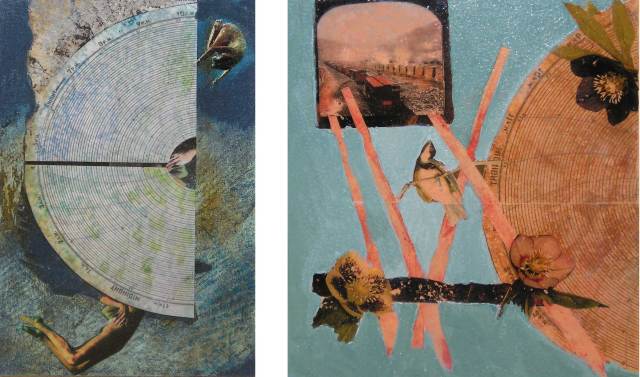 I recently put these up on a wall in my bedroom so I could live with them for a while. The arrangement on the wall demands that I do one more to complete a triptych. I realized that the two above represent two of the four elements: water and fire. I’ve used the four elements periodically in my work, and I was surprised that they surfaced again, completely subconsciously! These also echo the theme of the Watermark panels (see post below): the impact of industry and environmental degradation equally on humans and animals. I like how the figures on the left swim like fish and how the birds on the right are oblivious to the train in the distance. I will do another of these on the element of earth.

eco/community artist, educator, writer
View all posts by Ann T. Rosenthal →
This entry was posted in Uncategorized. Bookmark the permalink.